There is still a bit more to come before our house comes into sight–a few dozen miles, an accident that closes the highway, a bodega stop for bread, juice, and milk–but with only an hour to go, the boys at last descend into sleep, some 48 hours, 4 flights, 7 airports, a train, a monorail, two double decker buses, a subway, a rental car, two shuttles, a taxi, one hotel room, and four major cities (Istanbul, London, Washington, and New York City) after leaving the apartment they’d briefly called home in Tel Aviv.

A little respite at a highway-side hotel.

Oh, but what a fun trip! We went on the London Eye and up Masada! We rested our foreheads against the holy stones of the Kotel and admired the art of the Tate Modern! We floated in the Dead Sea, ate our weight in hummus, and once, briefly, saw the sun shine over the UK. What more could we have asked for?

So what if we had to get up at 2am in Tel Aviv for our 5:20 flight–but still had to run to make it after an argument with our car rental agency over the amount of gas in the car, the dead GPS, and the random charges tacked on at the last minute, nevermind the multiple lines of rigorous security? So what if, starving, I tried to buy the only edible food at the airport in Istanbul–a 3-euro chocolate bar–only to be told that the system declared it to be 4 euros, and, when I refused to buy it (on principle) and then handed the cashier a 2.50-euro chocolate, I was only given 1 euro change (“I don’t have 50 cents,” she said, “So you will take 1 euro.” “Um, yeah, no I won’t.” “You will.” “I won’t.” “Then here is your 10 euro and leave my store.” Well screw you too, lady!), and in the end I came out with nothing? So what if we had to wait in line for hours at Stansted, were exhausted when we got to the hotel in London, and then, attempting to take one last doubledecker bus around town to please the kids, found that after paying our 2.30 pounds each, our bus only went a block past our hotel? So what if we had to get up in the middle of the night–again–to catch a flight from Heathrow that flew directly over our house and way past it to Washington, DC? So what if we then flew not to where we left from (and where our car was), but to La Guardia instead, and when we arrived, the jetway was broken and we could not get off the plane? So what if after finally getting off the plane, we bought a ticket to the other airport, but the shuttle, instead, dumped us at Grand Central, telling us it’s New Year’s Eve (oh, really?) and all the roads are closed, and this is the last stop, so–goodbye and good luck!? 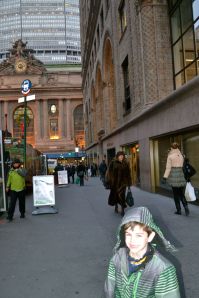 A few blocks and a few hours away from the ball dropping.

According to The Scientist, the only thing the kids are going to remember from our 3-week adventure is our arrival in NYC: me yelling F-You at the driver who dumped us at Grand Central and doing my one-person sit-in on his bus.

Does this mean it wasn’t all worth it? Did I mention the boys rode on a camel?

Did I mention we saw thousands of drunk Santas handing out candy at Trafalgar Square?

Did I mention we floated in the Dead Sea? 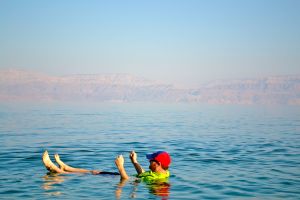 Oh yeah, I mentioned that one already.

But I guess the long and short of it is: 48 hours of hell on the return was worth a lifetime of memories that–for some of us anyway–should extend beyond my rear end on the stair of a bus parked in front of Grand Central in NYC while I shouted a bevy of swear words and threats.

“Oh yeah? Well, then, do call the cops on me! I dare you! Please please do! What’s that? Happy new year? Don’t you ‘Happy New Year’ me! Fuck you! Fuck you and your new year!”

By which I mean, of course, happy new year to you all.